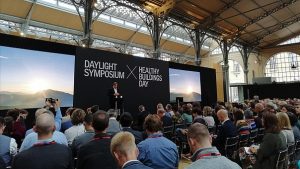 Presentation from the 8th VELUX Daylight Symposium that took place in Paris on 9 October 2019.

Hugh Dutton grew up in Jamaica and qualified as an architect at the Architectural Association in London. In search of complementary technical expertise, he began his professional career with Peter Rice, a renowned inventive engineer responsible for the Sydney Opera house and Pompidou Center amongst other seminal projects around the world. Rice sought consciously to muddle the traditional boundaries between the architectural and engineering toward an objective of pure holistic design. Hugh spent 13 years with Rice at RFR and related their experiences in the book Structural Glass notably on the first bolted structural glass and cable structures from the La Villette Science museum to the inverted pyramid at the Louvre. His final work with Rice before his untimely death in 1992 is the west front of the Cathedral de Notre Dame de la Treille in Lille using translucent stone.
Forming Hugh Dutton Associés in 1995, Hugh continued his exploration of design and built reality, having collaborated with many well-known architects and designers assisting them on the realization of their concepts with a notable attention to detail. The practice has collaborated on many now significant European projects such as the New Acropolis Museum in Athens, the Louvre Museum Islamic Arts and the Philharmonie de Paris. He has worked as a specialist designer in various places on iconic and sculptural components of buildings such as skylights, entry lobbies, footbridges. His work pays notable attention to sustainability, for example the ‘Climate Ribbon at the Brickell City Centre in Miami which filters sunlight and catches the sea breezes for natural cooling of an open public street. HDA’s work continues to concentrate on multidisciplinary design, combining structure glass and light, and are currently realizing a light filtering glass roof at the Hotel de la Marine on the Place de la Concorde.

the support of the presentation can be see and downloaded here