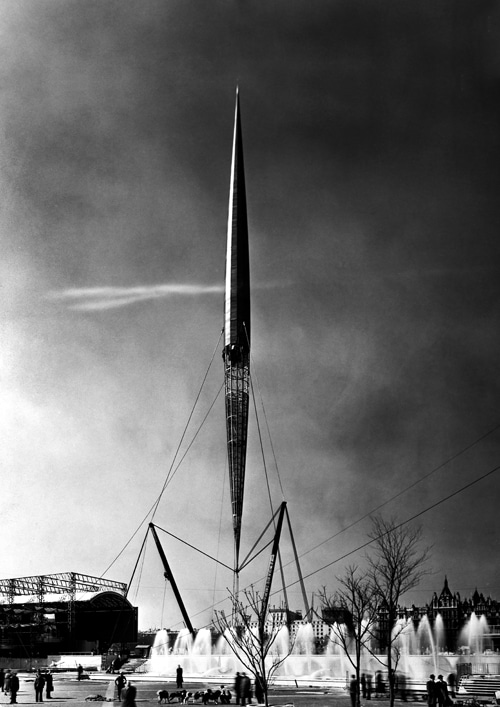 The Skylon was a futuristic-looking, slender, vertical, cigar-shaped steel tensegrity structure located by the Thames in London, that apparently floated above the ground, built in 1951 for the Festival of Britain.
A popular joke of the period was that, like the British economy of 1951, « It had no visible means of support ». 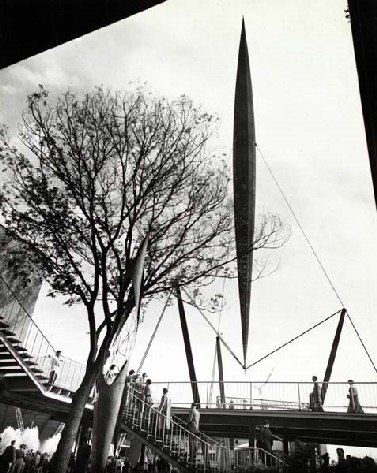 The Skylon was the “Vertical Feature” that was an abiding symbol of the Festival of Britain. It was designed by Hidalgo Moya, Philip Powelland Felix Samuely, and fabricated by Painter Brothers of Hereford, England, on London’s South Bank between Westminster Bridge andHungerford Bridge. The Skylon consisted of a steel latticework frame, pointed at both ends and supported on cables slung between three steel beams. The partially constructed Skylon was rigged vertically, then grew taller in situ.[2] The architects’ design was made structurally feasible by the engineer Felix Samuely who, at the time, was a lecturer at the Architectural Association School of Architecture in Bedford Square, Bloomsbury. The base was nearly 15 metres (50 feet) from the ground, with the top nearly 90 metres (300 feet) high. The frame was clad in aluminium louvres lit from within at night. Both the name and form of the Skylon perhaps referred back to the Trylon feature of the 1939 World’s Fair. Mrs A G S Fidler, wife of the chief architect of the Crawley Development Corporation, suggested the name and said she derived it from skyhook and nylon.

A few days before the King and Queen visited the exhibition in May 1951, Skylon was climbed at midnight by student Philip Gurdon from Birkbeck College who attached a University of London Air Squadron scarf near the top. A workman was sent up a few days later to collect it.
Questions were asked in Parliament regarding the danger to visitors from lightning-strikes to the Skylon, and the papers reported that it was duly roped off at one point, in anticipation of a forecast thunderstorm.