Image Above : Capacity for (Urban Eden, Human Error). Allison Kudla.
Algorithm as a Model. Closed System VS Open System.
In contrast to the field of architecture and engineering, where the concept of ‘model’ is understood to be a geometric description of objects or (‘Static Models’), the model that we propose is the description of computational algorithms in a generative design process (‘Algorithm as a Model’). These algorithms are instructions, simple rules which evolve multiple states. These new models therefore allow us to simulate the complexity of urban and architectural systems. These dynamic simulations may enable us to understand how systems work or how spontaneous pattern formations occur.
In the ‘Algorithm as a Model’ paradigm, script runs as a process with input and output variables relating to datasets which are processed in real time. These processes can be implemented by using parametric processes to produce an infinite series of possible outcomes.
Generative Systems design is a process in which the material and medium is algorithmic. Algorithms manifest dynamic and emergent behaviour.
Generative Systems propose to shift the focus from static models towards a computational logic, what Bruce Sterling calls Processuality. Processuality is a postmodern change in design perception, inspired by the craft of software. The world is rich with processuality- the growth of plants, boiling liquid, chemical patterns- processuality is all around us.
These Generative Systems allow us to establish relations between patterns, structures, processes, forms and to model evolutionary behaviours. These  techniques enable to simulate real-world phenomena.
The models we propose are articulated around different descriptions of the system concept. The first one, Static Models operate under the definition of a Closed system: “An isolated system having no interaction with an environment […] a System whose Behaviour is entirely explainable from within, a system without Input.” (Marius Watz).
The second model we propose, Algorithms as a Model is articulated around the description of Open System: “A group of interacting, interrelated, or interdependent elements forming a complex whole.” (Marius Watz).

Both models are described using different Modeling Techniques :
Static Models (Top-Down modelling) VS Algorithm as a Model (Bottom-Up Approach).
Static Models are shaped through Top-Down Modelling techniques. In this paradigm, we assume that we know how a system works or behaves. This model manifests some features : the system description is static and we have a good understanding of the system is in its entirety, and we also understand exactly how system components interact with each other.
In contrast, the ‘Algorithm as a Model’ is shaped through Generative Science Paradigm. This paradigm builds understanding from the bottom-up. Phenomena can be described in terms of interconnected networks of simple Agents. An Agent is a persistent thing that has some state we find worth representing, and that interacts with other agents and serves to mutually modify each other´s states. (Nicolik, I.)
Systems are composed of interconnected agents which, as a whole, generate complex behaviours, exhibiting emergent properties. These properties are not the same as those of individual agents.
Therefore this new paradigm, allows us to model the complexity of material and architectural systems through the Agent-Based Model under the Bottom-Up approach. This model will be useful to understand the evolution of large scale socio-technical environments such as the Living City.
Forms Generated by Code (Form Follows Data). Forms Generated by Sensing. (Form Follows Behaviour).
Lev Manovich counterposes in his Info-Aesthetics Manifesto, Bauhaus aesthetics versus Information aesthetics. He describes this as an Industrial Society. Bauhaus aesthetics were articulated through the slogan “Form Follows Function”. Manovich explicits in his Manifesto how new info-aesthetics emerge in comtemporary culture. This new aesthetics of information culture manifests itself more clearly in computer softwares, algorithms, generative softwares. In this new info-aesthetics culture a new slogan emerges, “Form Follows Data“. In this new stage Manovich defines Form as a Distributed Representation, an Emergence Process.
« Form Follows Data », defines a new paradigm in which data structures encode the form of systems through a computational logic. An algorithm designed through generative processes is fed by data sets. These data sets generate dynamic patterns, forms and evolutionary behaviour in the systems.
We propose to implement the above concept, exploring “Form Follows Behaviour” through the deployment of different sensing technologies, which will generate dynamic data structures. These sensing systems generate formal structures which evolve in real time according to the dynamic behaviour of different systems. In this way formal processes are dynamically modelled through these generative processes.
Generative Fabrication : From Code to Atoms.
We set out to explore the concept of Generative Fabrication and in so doing we extend Generative Science Approach to the field of Personal Fabrication.
Generative fabrication explores how generative algorithms design can be combined with digital fabrication to produce physical objects which are the result of dynamic software systems.
The use of digital fabrication technology connects parametric software processes and explores new ways of organising the manufacturing workflow – turning bits into atoms. This overlap between technologies generate new ways of digital fabrication.
Here are some prototypes which articulate this field of experimentation between algorithms and digital fabrication :
Capacity for (Urban Eden, Human Error). Allison Kudla. 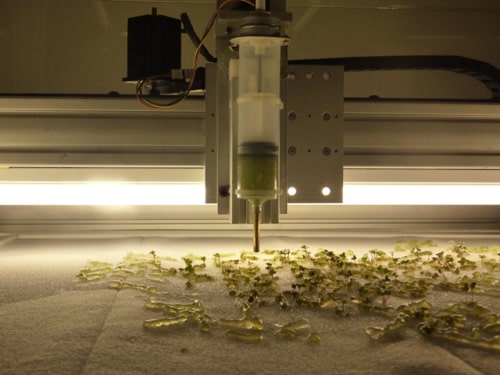 Category: #Living Architecture #Digital Fabrication
This system uses a computer controlled four-axis positioning table to “print” intricate bio-architectural constructions out of live plant cells. Suspended in a clear gel growth medium, these cells continue to divide and flourish, gradually filling in the construction. The algorithmically-generated patterns drawn by the system are based on the Eden growth model and leverage mathematical representations of both urban growth and cellular growth, thereby connecting the concept of city with the concept of the organism. This project is working to make concrete the idea of dynamic and fluid computer space altering the expression and formation of a living and growing biological material, via its collaboration with an engineering mechanism.
more information at link https://allisonx.com/ 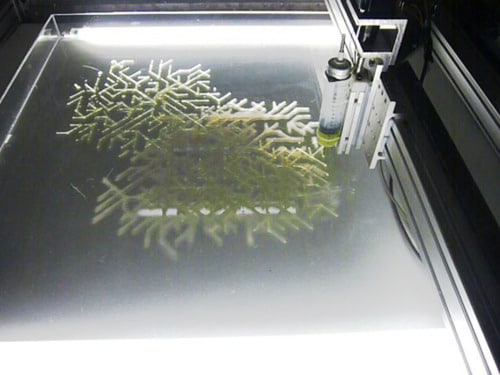 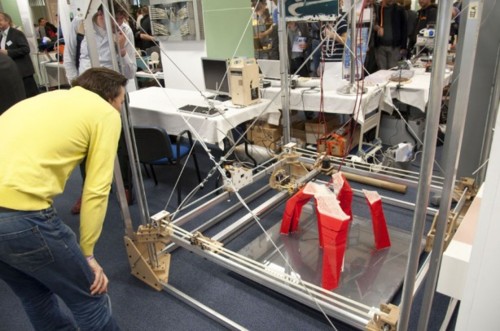 Category: #Open Hardware #Digital Fabrication
Inspired by the RepRap Project, the idea arose of having a machine that could actually produce objects exceeding the dimension of objects produced by desktop fabbing devices as the RepRap, Makerbot. This project is about building a Repstrap kind of machine with a approx. build-envelope of 1m^3, designed with a focus on openness, extensibility and lots of room for experimentation.
more information at link https://lebigrep.org/ 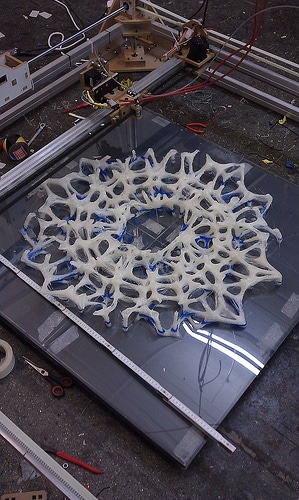 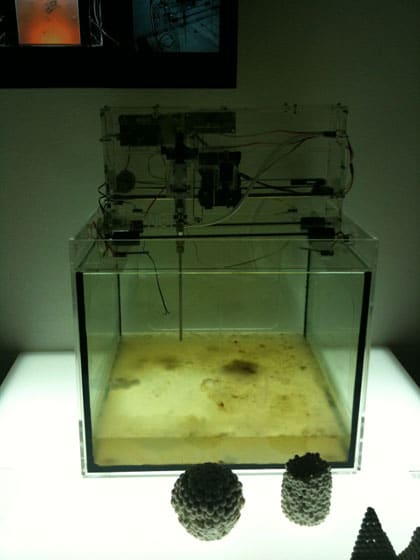 Category: #Digital Tectonics #Digital Fabrication
NGPS is a prototype of a multimaterial projection machine that leaves a few drops of paste like material in a liquid medium, a chemical solution that causes liquid droplets deposited perfectly spherical form. NGPS operates in an environment where there is practically no gravity, because it controls the suitable density and amount of each component, it is possible to deposit droplets of material that are maintained in suspension until solidification is completed. The manufacturing process based on the aggregation of small logical propulsion of material, allows to combine different materials, adjusting for performance criteria, and allows the development of complex structures by overlapping of material combinations.
more information at link https://responsiveenvironments.es/post/1063124982/title-ngps-non-gravitational-printing-system
–
Self-Assembling Virus. Skylar Tibbits, Arthur J. Olson.

Category: #Self Assembly
This video shot in real time with no tricks shows the process of self-assembly driven by random motion. It demonstrates how viruses and other complex biological organisms put themselves together without direction from the outside, except random motion from heat.
The Self-Assembly Line aims to construct a large-scale version of self-assembly virus modules as a user-interactive and performative structure. This is an installation that builds installations, where people engage the assembly process by rotating the enclosure, changing the speed/direction and adding parts to influence the performance of self-assembly at macro-scales.
more information at link https://responsiveenvironments.es/post/19351312773/title-self-assembling-virus-category

Category: #Additive Manufacturing #Digital Fabrication
The basic principle of the 3D-printer is quite simple: The desired object is printed in a small tub filled with synthetic resin. The resin has a very special property: It hardens precisely where it is illuminated with intense beams of light. Layer for layer, the synthetic resin is irradiated at exactly the right spots. When one layer hardens, the next layer can be attached to it, until the object is completed. This method is called “additive manufacturing technology”.
more information at link https://responsiveenvironments.es/post/14123146234/title-the-worlds-smallest-3d-printer-category
–
From Code to Atoms. Marius Watz. 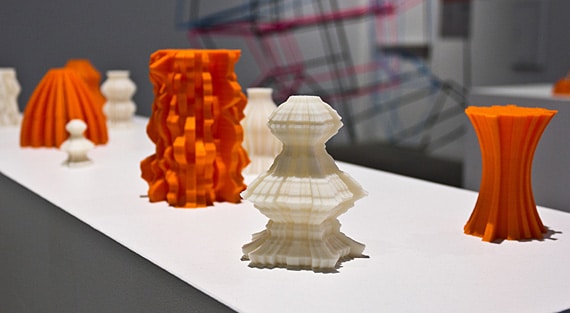 Category: #Digital Fabrication #Generative Systems #Forms Generated by Code
Workshop participants will explore how software processes can be combined with digital fabrication to produce physical objects that are the result of dynamic software systems. They will look at how generative systems can be used to create objects according to a programmed logic, allowing for great complexity and a semi-automated model of creativity.  Digital fabrication drastically changes manufacturing by democratizing access to industrial tools as well as changing the way objects are produced, opening the door for the on-demand creation of bespoke objects. Combined with the “craft” of code it becomes possible to directly connect parametric software processes to an instant manufacturing workflow, turning bits into atoms and introducing a paradigm that is radically different from traditional 3D modeling.  Generative systems shift the focus from static models towards a computational logic – what Bruce Sterling calls processuality. Here objects are understood as mere instances of a family of forms, produced by a specific interaction of parameters. Such forms may be data-driven or created through interactive means, adapting to conditions coded into the system. The artist becomes a “gardener” of possible forms, harvesting desirable results in an iterative process of coding and prototyping.
more information at link https://responsiveenvironments.es/post/20904824233/title-from-code-to-atoms-category

HAND-DRAWING THE COMPLEXITY – experiments #5 and #6 by Jaime Eizaguirre