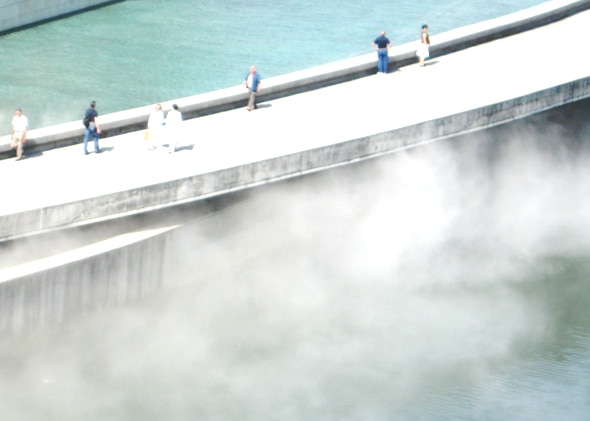 A recent article on ArchDaily talked about our ‘in progress’ footbridge at La Roche sur Yon.
We’re pleased to be a subject of interest for a such an important architecture website, and what we appreciate even more is the public feedback and the list of comments left, which have inspired some interesting reflections about our work here at HDA.
I would particularly like to share some thoughts on the idea (or even obsession) of « being original » in architecture, the meaning of copying someone or something, and what this could imply nowadays, in a time when everybody is talking about copyright and how it’s changing with new communication technologies.
This is a very complex subject and I don’t have any firm ideas or theories, but I would like to use this post just to share some thoughts on it.
In the article I’m referring to, the 80% (maybe more) of comments have a « this project looks like… » format, that’s why I’m mindfully using the word « obsession » above.
My first reaction was to think that these comments were negative, simply because they were saying that at HDA we are not original. But when I heard my principal Hugh Dutton saying happily « they’re comparing us to Calatrava, that’s great! », I understood that my interpretation was very subjective.
In fact, being original has something of an obsession for architects, but today it’s maybe becoming an antiquated attitude.
With a bit hindsight, it’s quite crazy to think that a lot of architects (am I one?) are always looking to be original and different. I would dare to say that architects with an originality obsession are much more common than the ones with the obsession of simply doing a good project. My perception is that this is in some ways linked with making money in architecture.
If society is looking for spectacular contents, it’s quite evident that « show business » architecture is encouraged. Maybe I’m not being original if now I mention the « Guggenheim effect » and that’s why I want to be the first architect who talks about the Guggenheim side effect, defined as a phenomena of replacing architectural meaning with spectacular contents.
« Suddenly there is this great titanium-clad mountain in front of you »
Doesn’t this sound as a show business language?
But maybe this is coming to an end: as @ecosistema says, « Architecture is not sensationalistic anymore. Helped by a double crisis, the one of the real estate agency and the financial one, sensible architecture is now born ».
I totally agree with this vision of architecture, and I also would like to add that the coming of a more sensible architecture is also helped by new communication technologies, as I think that architecture will soon need to redefine itself as is happening with music or movies on the web.
For music, there is a great example we can use to clarify this point: Spotify, a new web-based music browser supported by big music labels, is reinventing the music business, as it’s selling a service which allows you to listen to a large quantity of music, rather than to sell you CDs or songs.
I’m starting to wonder if we shouldn’t set out something similar for architecture.
I believe this obsession for originality comes directly from the need to sell an image rather than a design service.
This reminds me of when Domenico (Ecosistema Urbano office) said « I wish everyone copied our Ecoboulevard project all over the world » as then the office would have become the world reference for this kind of project.
That’s maybe the same wise and contemporary thinking we find, in an easier form, in one of the last comments (by PB) on the ArchDaily post: « Looks incredible – I wish more plebeian structures were this beautiful…If it’s a good solution, why not copy it when it? As long as it is well done and carefully conceived. »
[ For italian readers who knows Baricco’s novel « I barbari », I invite you to read this on barbarian contemporary architecture. ]

I have not more to say that I completely agree with you. It’s time to forget the idea of the star-architect and re-think architecture as it always have been.
Frank lloys Wright used to say “I know the price of success: dedication, hard work, and an unremitting devotion to the things you want to see happen”
So, we architects just have to give ourself a chance to work hard in a more human and sensible architecture.

Ethel,
I would like to thank you very much.
We really appreciate your support.
We especially like the words « dedication, hard work, and an unremitting devotion »: it will be one of the main topic of the upcoming interview with Hugh Dutton speaking about the importance of humility in architecture.
I think that we architects we have a lot to say today and as you mention, we just have to give us the chance…

Hey guys another excellent post totally agree with what is being said here.I think there is the same problem with the word innovation which is commonly thought as something that has to be original or imperatively new,which personally I think its absurd innovation was to do with the level of benefit that an idea brings to people therefore for example constructions systems that maybe considered old fashion for 1st World countries could represent a real innovation in the 3rd world,Thats why I think architects have to stop wanting to be original and start doing architecture that really matter to people.
By the way the footbridge its very cool!!

Great post, and i totally agree. The idea of an architect as a prima donna (Fanciful, impulsive and god-likely-untouchable in many cases, always obliged to espectacular originality no matter the cost) is something this proffesion has suffered for a long time. « Architecture is the new R’n’R », i remember reading… and suddenly we all wanted to be the Jonas Brothers…with a black Prada outfit.
I guess the worst and most difficult part is making this obvious to politicians, who are still eager to have « A Gehry », « A Foster » or « A Hadid » in the perverse idea that this would earn them win after win and enough popularity to stay in charge (a politician main work, as you know). Arhitecture becoming this way an excellent background for a photo-call on the inaguration day… and basically not much more. Made for the people, without the people.
I liked Ethel’s quote. I have one too, it’s from John Ford, who when asked by Truffaut about his moviemaking achievements said:
« I never touhght of my work in terms like « Art » or « This is so huge, it’s mindblowing » or that short of things. For me, it has always been a hard job. One that i very much enjoy, and that’s all »

[…] HDA put forward the idea of sharing in Creative Commons as a way to get higher quality results. Photos, videos, texts, methods, research, calculation and drawing scripts which are traditionally used as the product, are shared for free and everyone is invited to use and improve them.https://complexitys.com/tag/script/- This is based on a future vision of practice based on design services and not on the product itself, as it is explained in the text “Guggenheim side effects and the Architects’ originality obsession”. […]

[…] Guggenheim side effects and the Architects’ originality […]

[…] effect”. Inevitably, this reminded me of a post I had written some time ago for the blog complexitys (HDA | Hugh Dutton Associés) and I would like to share my ideas with our […]