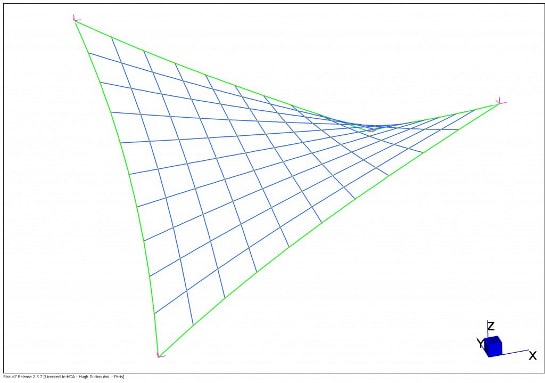 For Complexitys this post represents the first one dedicated to more technical and scientific aspects, which is an important topic developed at HDA. This post is the first entry of our new ENGINEERING category.
With many architectural complex forms being studied at HDA, the complexity of the structural issues does not allow us to entirely separate architecture and engineering. In other words architectural aspects, in terms of geometry research for example, are deeply linked and driven by the structural behaviour of the constitutive materials. The choosing and defining of an optimized and efficient form for the structure are elaborated on during several exchanges between architects and engineers in order to fulfil all design criteria.
In order to have a better view into an area of the engineering works performed at HDA, this 1st post is a short non-exhaustive description of some of the script tools developed and their practical applications. These tools were developed with the Application Programming Interface (API) of the Finite Element Analysis software Straus7 (Strand7 in the USA) that allowed us to perform multiple and iterative computations.
Other Complexitys posts in the future will eventually elaborate on this (too) short presentation by explaining more precisely the questions and thinking that lead us to these scientific developments.
First, some of the tools we have developed allow a better post-processing of the results given by the Straus7 software. A particularly useful tool has been developed, during recent months, to check the structural steel elements of any complex structure according to the European Standards (Eurocode 3). Without automatic tools, these verifications are no longer possible for each beam when the number of elements is so large in the models. The use of the API scripts permits a precise verification of the structural members and therefore an optimisation of the section sizes. 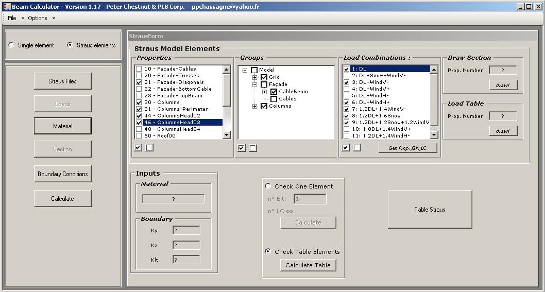 View of the Developed Eurocode 3 Application

For cable net and membrane structures, or more generally for tensile structures, the form findingproblem is a well known issue. “Form finding means to find the optimal deflected and finally visual shape due to a given stress distribution acting on the deformed structure.” Different mathematical solutions exist like the ‘force density method’ or the ‘dynamic relaxation method’, developed in several commercialized applications. But, in these types of software, the way to control the final geometry and the model inputs and results is not entirely possible, which is why we started internal researches and developments at HDA on that topic. We very often work on cable net structures that need a fine tuning of the tensile elements that allow us to combine different goals: global high stiffness of the structure, low internal efforts, stability, architectural shape… Therefore we are developing applications with the API Straus7, whose intent is to have a better control on the different influential parameters. 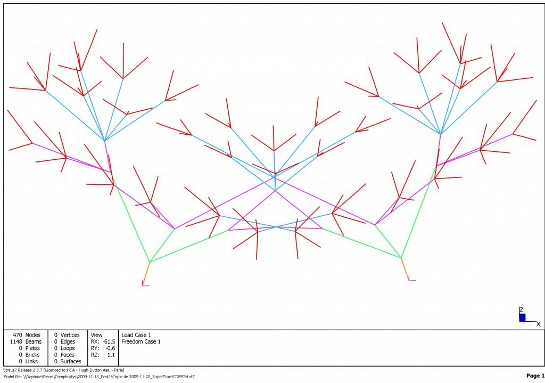 Another interest at HDA is in the computation of the instabilities within buildings. Nowadays, especially in steel constructions, the size of the structures is getting higher and the constitutive element lengths longer. At the same time, the steel material becomes more and more efficient and the ratio weight / size decreases. But these structures are constituted by elements that present very high slenderness and thus the buckling risks increase. Different works have been performed at HDA not only to control individual instabilities (widely treated by the Eurocode standards) but also to deal with light big structures that can be subjected to global buckling effects (for example in thin shell structures).
Other different small API scripts of lesser importance have been developed at HDA, which help us to be able to treat particularities in complex structures. For example, applications developed to orient beam sections according to the supported glass elements in a large free form grid shell. Another one is dedicated to determining the deformations of all the cable elements relative to their supports (catenary effects under given external loads) in a cable net structure. It allows us to precisely tune the initial pre-stress of each individual cable in order to fulfil the deformation requirements (according to the Standards).
For the structures studied at HDA the use of script tools has become a necessity to solve the complex engineering problems. 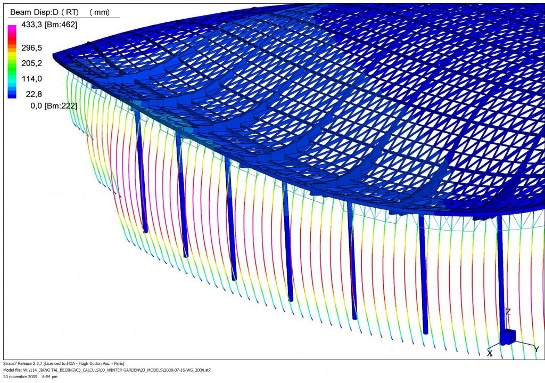