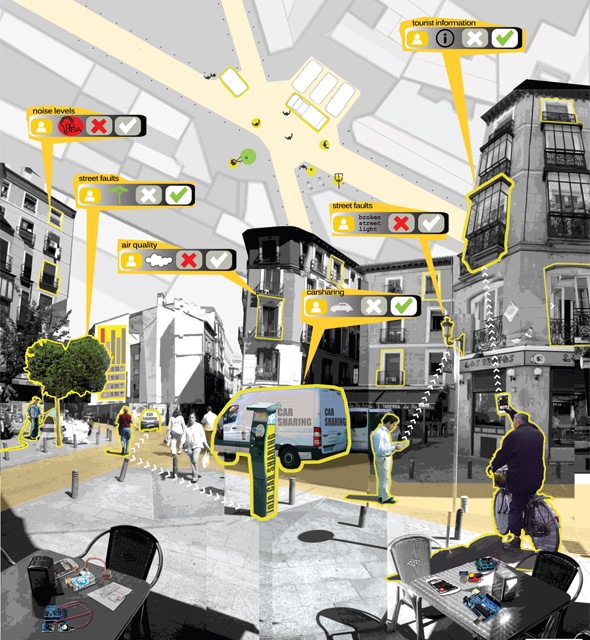 This post is the first of 4 posts about Participatory Sensing (projects and research) that are going to be published weekly for the next 4 Fridays.
In these posts I will share my research on participatory sensing, open data and smartcities that I started about 6 months ago.
The first post is about The data-citizen driven city project which I developed with César García, Jorge Medal and Sara Thomson on September 2011. With this project, produced by a multidisciplinary team consisting of an IT System Administrator, an Industrial Designer, an Artist and an Architect, I really started considering how data can empower communities and catalyze social change.
We presented The data-citizen driven city project for the 4Th ADVANCED ARCHITECTURE CONTEST « CITY-SENSE: Shaping our environment with real-time data » by The Institute for Advanced Architecture of Catalonia on the 26Th September. Our proposal focused on a technological, social and urban process would take place over ten years time. Citizens would get deeply involved into expanding the Internet of Things, adopting an active prosumer role, instead of perpetuating passive postures. In the end, data-citizen driven cities would enable local direct democracy processes that could enhance their sustainability and efficiency.

Below I present the original texts and images of our proposal where main ideas are discussed along a whole decade timeline:
Understanding reality with data, changing personal habits.
Using open source technologies, like Arduino-based sensor units or mobile apps, data-citizens will be able to gather their own real-time data regarding issues they are really concerned about, such as air quality, noise levels, street deficiencies, plagues, etc. All data will be shared in open public repositories, like Pachube, available for everyone. Long term data archival will allow citizens to gain a better understanding of the urban environment and to improve their daily personal habits. 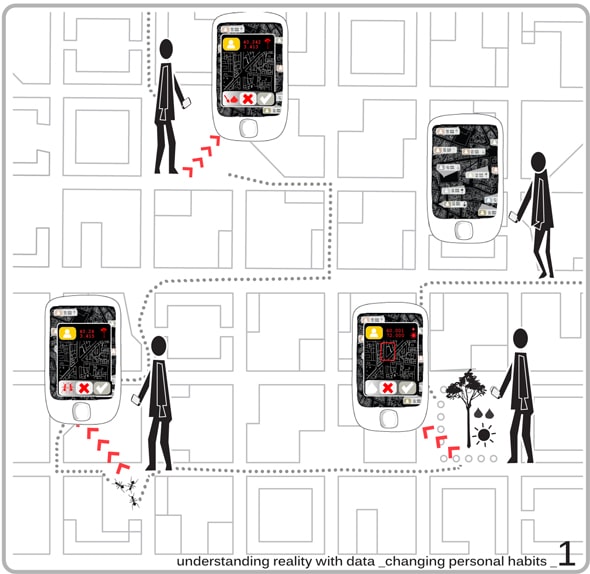 Collective intelligence and critical mass. Social Cohesion.
Once there is a critical mass of participants, distributed citizen sensor networks will reveal new emerging patterns that will lead to a new collective intelligence. Citizens will soon become aware of the political power of data and they will begin to get organized in local work groups to develop new strategies to improve their neighbourhoods. The massive adoption of sensors will bring their price down, allowing anyone to participate in the extension of this smart city data layer, regardless of their income. 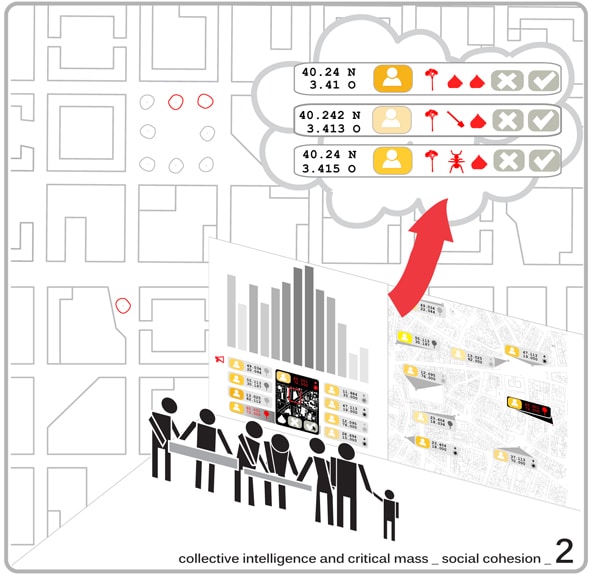 Renovation of the Social Contract. Collective emerging actions.
Involvement and commitment will be part of a new social contract online casino in which the rights and obligations of the citizens and the institutions will be redefined. The maintenance and development of local resources will be delegated to neighbours that will feel engaged in the improvement of the urban ecosystem. Alarm warnings will not be accounted for in an isolated way; an holistic approach based upon data modelling will provide a global solution taking into account all the gathered data. Open data governance and accountability will be enforced through civil actions. The mission of local institutions will consist in supporting these local processes and developing long term plans. 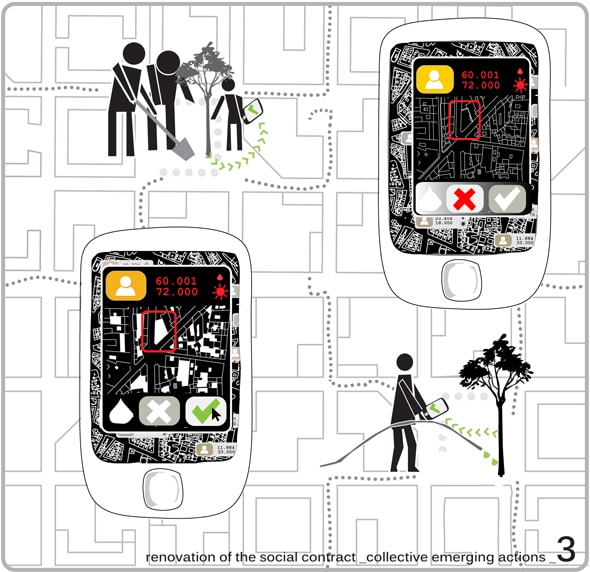 Conclusion: A more sustainable and democratic city.
By the year 2020, citizens will participate indirect democratic processes at a local scale to transform the city into a more sustainable and efficient environment. Data will enable new uses of public spaces offering streamlined solutions. People will feel highly engaged towards their neighbours and surroundings in contrast to their previously detached postures. The success of radically open transparent processes will constitute a genuine milestone in the transformation of 21st century public institutions. 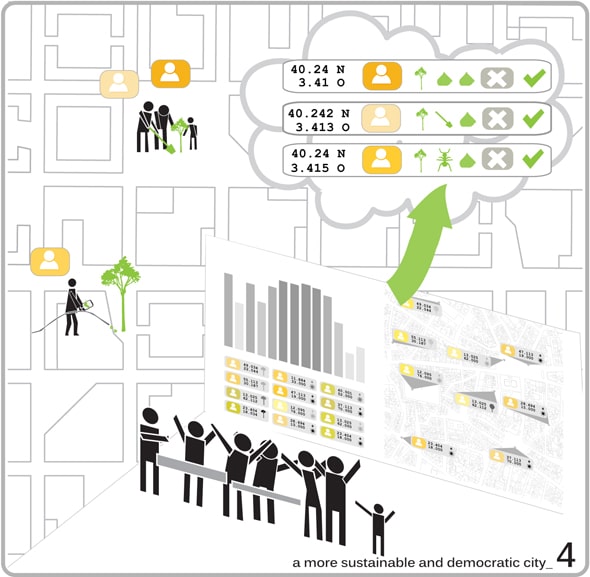 On the 5th December results where made public and we obtained an Honourable Mention. Anyway the most interesting part of The data-citizen driven city project started once the proposal was submitted. On October we decided to start-up a study group to continue working on the DCDcity and its physical implementation at the “ViernesOpenLab” at Medialab-Prado. We have already got in touch with the “air quality egg” project members to collaborate into this global network of air quality enthusiasts. But this is another story that might be written on a future post. 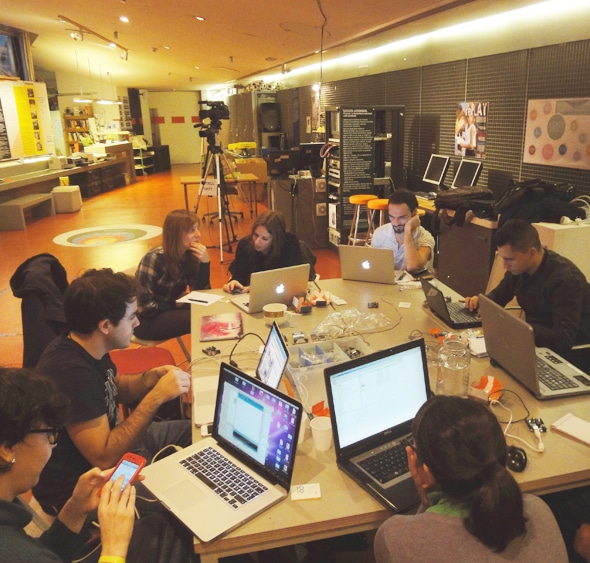 2nd December Arduino programing workshop at Medialab-Prado at the “ViernesOpenLab”
Bibliography:
Getting Started with the Internet of Things by Cuno Pfister.
The value of open hardware is in the empowerment of communities by Usman Haque.
Program Your City: Legal and Governance Issues of an Urban Integrated Open Data API by Marcus Foth, Queensland University of Technology.
Smart People, Dumb Objects, Networked Environments by Usman Haque.
Notes on the Design of Participatory Systems – for the City or the Planet by Usman Haque.
Talking back to your intelligent city by Saskia Sassen.
Participatory sensing by Burke, Jeffrey A; Estrin, D; Hansen, Mark; Parker, Andrew; Ramanathan, Nithya; Reddy, Sasank, UC Los Angeles: Center for Embedded Network Sensing.
This post is by Sara Alvarellos, a guest editor at complexitys.com
Sara Alvarellos is a young architect interested in citizen engagement and implications of technology for architecture and urbanism, actually collaborating with sienteTecity and Oblomobka. Currently researching about Contemporary production, commons and The Internet of Things into Masterdiwo_Alicante framework.

Nikolas Weinstein Studios : everything but engineers

[…] to participate in the extension of this smart city data layer, regardless of their income…..Via complexitys.com Escrito en Noticias por scoopit / 18 enero, 2012 / Sin comentarios […]

[…] Our proposal focused on a technological, social and urban process would take place over ten years time. Citizens would get deeply involved into expanding the Internet of Things, adopting an active prosumer role, instead of perpetuating passive postures. In the end, data-citizen driven cities would enable local direct democracy processes that could enhance their sustainability and efficiency. PARTICIPATORY SENSING 1/4 – the data-citizen driven city | Collective intelligence | Scoop.it […]