Home ProcessOpen Culture Christopher Alexander : "A city is not a tree"
Open CultureProcess

Christopher Alexander : "A city is not a tree" 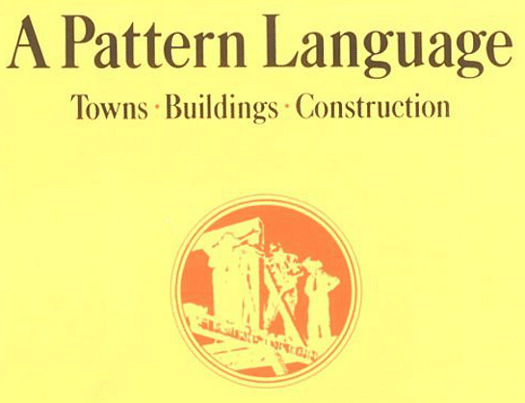 Cover of the book « A pattern language » by Christopher Alexander

It often happens that the most significant and interesting contributions in a discipline such as architecture come through unusual routes of unlikely character. And very often the recognition of the person and appreciation of the value of its work comes late. Sometimes too late. But since the seed of a wonderful idea (rather than of a revolutionary theory) has been planted, even if it is ahead of its time, there is a sort of inevitability that will bring it to fruition.

How many times have you heard of Christopher Alexander?

Or rather, how many times have you heard of the architect Christopher Alexander? Few, very few. His work, especially his writings, were ahead of their time and are now contemporary and have had a powerful and revolutionary influence in many fields of technology. But now, after several design styles (postmodernist, deconstructivist, blobitecture, etc..) his ideas are beginning to come to the fore, even among those who hypocritically ignored him… architects.
Alexander is one of the fathers of the idea of increased intelligence of citizens, which eliminates hierarchical relationships in favor of the construction of a perfectly symmetrical society. An idea that is related not only to the structure of the city, but also to an innovative model of social organization in which the main purpose is the ability to generate active relationships and enhance the synergy between atoms and bytes, with an exponential increase of the second intangible component.
Alexander began his career as a design theorist and pioneer of computer-aided design methodology, and his book « Notes on the synthesis of form » was a classic in the sixties, concerned with the processes by which parts transform into wholes. He wanted to know how we are implementing this part-whole synthesis, and strived to optimize our “human technology” using comparisons with processes that happen in nature.
He was looking for a method to handle large amounts of complex data and he identified the solution in patterns that are found repeatedly in the built environment, and when combined with each other they shaped systems or « languages « . He referred not to objects, but relations of objects, which could be identified and re-combined and re-used, in a language-like way. It’s easy to understand why earlier generations of computer programmers, organization and systems theorists, design theorists and many others were attracted by his ideas and the types of tools he was developing.
These “languages” were already visible in traditional design methodologies, and implicitly they refer to his belief that anyone can be taught how to design efficient and beautiful buildings, as humankind has been able to do throughout the course of history. In some ways, Alexander introduced the idea of democratization of design and production by empowering anyone to design and build 30 years before the coming of mainstream digital fabrication tools, fablabs, and projects such as the Wikihouse.
Alexander, as a mathematician, was looking to improve the design process of our cities in a scientific way. In doing that he was guided by a strong ethic and social spirit. He considered 20th century architecture styles as meaningless “varieties of elaborate decoration, masking an underlying kind of fragmented, objectified structure that is incompatible with evolved, sustainable form. They are visually exciting compositions meant to help market what is at heart a series of commodified industrial objects. However exciting and promising they may first appear, in the end they can only add to the growing disaster that is the human built environment.” And looking back to some episodes like the legendary debate of 1982 with Eisenman, the distance between Alexander’s “cosmology” and other architects’ positions is substantial. 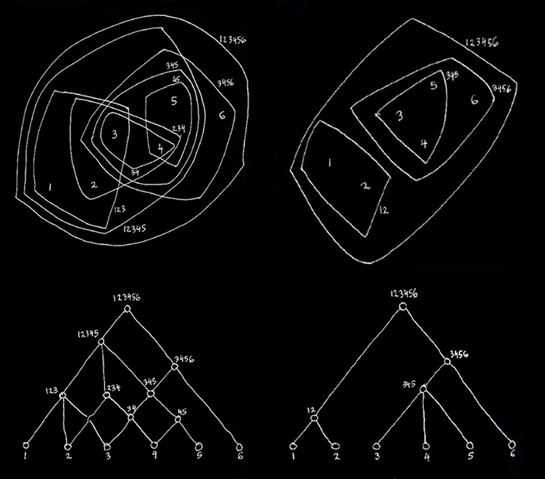 A city is not a tree

In « A city is not a tree », Alexander criticizes the tree diagram that governed the planning of the time, a scheme where each part interacts with the whole through a hierarchical and pyramidal relationship, made up of subassemblies, collected in groups, that are connected in units of order gradually larger. In opposition to this deterministic diagram at the base of the « artificial » cities, Alexander proposes the model of the « natural » city. Such a city settles over time and is structured as a « semi-lattice », an open structure, where the parts are connected to each other by several orders of relationships, and the elements of a smaller scale may interact with others without being subjected to an inflexible hierarchy. This model enhances and facilitates multiple connections and informal levels of relationships between different orders of scale and significant interferences between the parts.
At the center of his theory there is the idea that good design is not a matter of elements functioning properly in a mechanical system, but rather of spatial regions that amplify each other in a larger whole. This means that you cannot consider the environment by breaking it down into small parts, but you need to see it as a set of units, which support and enhance each other in a complex and interdependent whole.
Through his writings, it is possible to capture Alexander’s idea that considers the project as the working relationship among a large number of variables that cannot be handled intuitively. So we witness the rise of the need for an advanced model, driven by the rules of mathematics and cybernetics, based on interdependence and on the value of feedback.
Generative design has these capabilities and brings a substantial change in the role of the architect, from decision-maker to guide. Thus, Alexander intuitively identified a different role in which the architect-guide follows the project throughout its life cycle, and doesn’t entertain an episodic relationship with the project as was the case in the past.

– C. Alexander, “A city is not a tree”, 1965
https://www.abc.polimi.it/fileadmin/docenti/TEPAC/2012/FONTANA/A_City_is_not_a_Tree.pdf
– The 1982 Debate Between Christopher Alexander and Peter Eisenman, “Contrasting Concepts of Harmony in Architecture”, 1982
https://www.katarxis3.com/Alexander_Eisenman_Debate.htm
– Nikos Salingaros, “The Radical Technology of Christopher Alexander”, 2011

The Radical Technology of Christopher Alexander

[…] has opened the future cities structural form question. As Christopher Alexander argued in 1965 in “A city is not a tree”, city structure, is not a tree. Both centralized and decentralized tree planning city models are […]