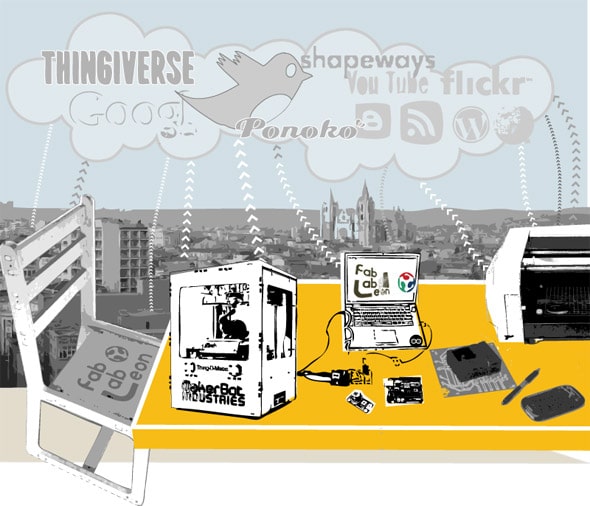 This post is the second of 4 posts that are going to be published weekly in the next Fridays about Digital manufacturing (fabbing) environments. In these posts I will share my research on fab labs, open innovation and smartcities, mainly in Europe and in Spain.
The second post is a result of the visit to the Fab Lab León on the 27th of December when Fab Lab León had just opened its doors to the general public. León is situated in the northwest of Spain. I am eager to share my interest for this node of the Fab Lab network.
tMA Foundation (Telice Magnetic Anomaly) is a non-profit organization created by TELICE. tMa team discovered an article written by Neil Gershenfeld about the Fab Lab network in October 2010. They got in touch with Neil in December 2010 and began the adventure of settling a Fablab in TELICE’s hometown. From December 2011 Fab Lab Leon’s doors are open to the public and it started working on issues related to the citizens of León.

The foundation’s brief is to encourage entrepreneurship, leadership and interest in science and technology, especially among young people. tMA see the personal fabrication revolution as an opportunity to place León in the secondary sector (industry, trades construction), and I would dare say that it is plausible. At present there are five fab labs in Spain; three of them are related to academic or artistic institutions and two others have a wider range of users related to industry and entrepreneurship. Among these, Fab Lab León is giving a real opportunity to make personal production and digital manufacturing accessible and comprehensible for the public.
Nowadays « do it yourself » and « do it with others » are trendy concepts that are referred to on the net. However those practices have been part of the daily routines in rural environments and have been passed on as traditions to the new generations. In small cities in Europe, those practices are still usually found not only among the elderly but also among young people that have grown up making things in their parents’ garage. Fab Lab León offers the opportunity for this community to share their experimental knowledge and discover new technologies. For those people who don’t know where to go or don’t have enough space at home, the fab lab is the best place to go, encouraging collaborative designing and making it possible for people to learn from one another. 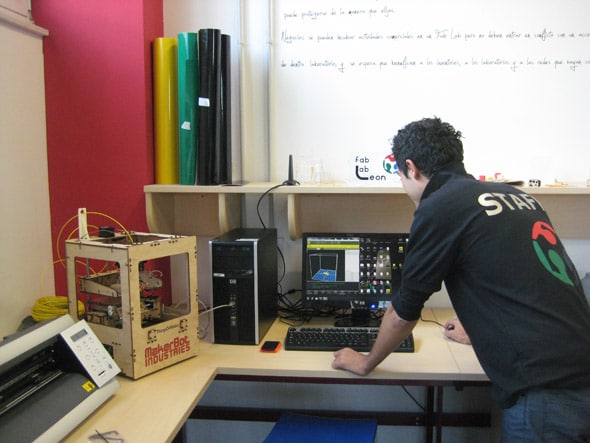 Their business model, that aims to be self-sufficient in the near future, is very interesting. Even though they have only been open for three months, their approach is similar to that of Protospace, which we saw last week. Fab Lab León is situated in the industrial area of Onzonilla in the outskirts of León. It offers a different service for enterprises, businesses and entrepreneurs. Closed fab lab sessions for enterprises can take place only twice a week during half a day. Although it could seem contradictory, this mixed business model allows to keep a low entry fee for members of the fab lab. Those members are ordinary people who pay to access the venue and to use its facilities for their own projects. They don’t only have the opportunity to manufacture just about everything, but they can also meet and get in touch with people sharing the same interests.
Fab lab León is a relevant open node that is building an entrepreneurial ecosystem and an infrastructure to develop creativity and promote innovation. Having access to such different services at a fab lab in an industrial area gives enterprises and amateurs/prosumers new opportunities. Where else could these “do it yourself” and “do it with others” practices in the commons and the open design framework meet the small and medium enterprises and entrepreneurs?

During the last few months many workshops have been taking place at Fab Lab León. By constructing their own products and having to make decisions about how it might work, users increased their knowledge. Moreover they became more involved and responsible for the adoption and use of these technologies. The manufacturing experience is shared and a community of fabbers outside the academical and artistic context is increasingly growing. Participants in the first workshop at the fab lab have already shared their experience on the fab lab’s website. In a city of 140.000 inhabitants in the northwest of Spain there are fabbers, whereas in Madrid all that one can find are two or three Makerbots at Medialab Prado.
Far from aiming to replace the existing systems, this project provides a venue in which to think of how relationships between society and technology might exist otherwise. Would this relationship be different and more related to the local context? It is an enormous challenge to communicate the possibilities that a fab lab can offer citizens. It is exciting to see how the community of users is growing. Will the community make a long term use of it? Will we be able to communicate that this is more than just a new trend among geeks? These initiatives promote an understanding of what design and industry are, and how it can develop through open design. It is important to be in touch with these types of new manufacturing processes; it allows creators and entrepreneurs to foresee their capabilities and obtain strategic advantages for their future projects. 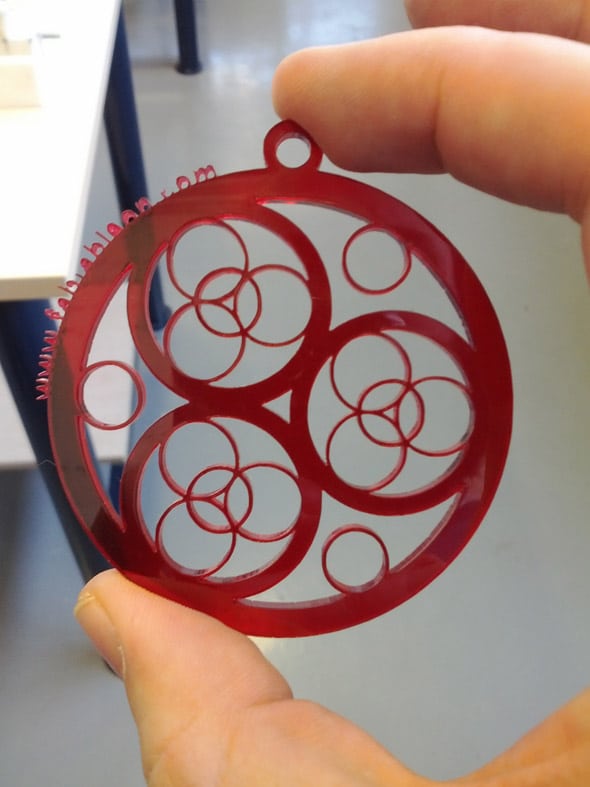 All images were taken during the visit to Fab Lab León on the 27th December 2011.
Information about Fab Lab León can be found on the website https://www.fablableon.org/.
Finally I am grateful to Cesáreo González, Uribex, Rubén Ferrero and the rest of staff for their hospitality and availability.
This post is by Sara Alvarellos, a guest editor at complexitys.com
Sara Alvarellos is a young architect interested in citizen engagement and implications of technology for architecture and urbanism, actually collaborating with sienteTecity and Oblomobka. Currently researching about Contemporary production, commons and The Internet of Things into Masterdiwo_Alicante framework.