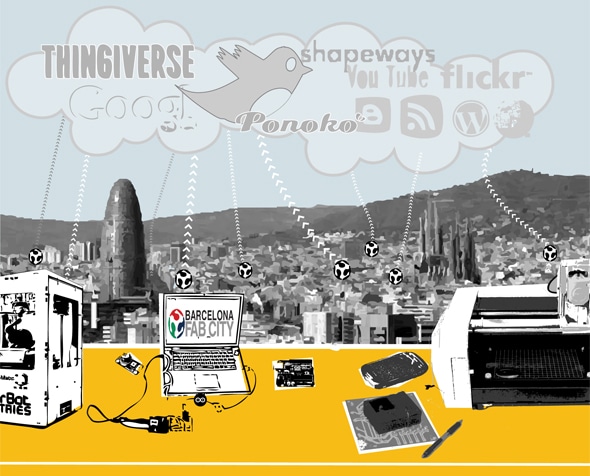 This post is the fourth of 4 posts about Digital manufacturing (fabbing) environments that we have been publishing weekly on Fridays. In these posts I have shared my research on fab labs, open innovation and smart cities, mainly in Europe and in Spain.
The fourth post is the result of a research on fab labs and their relationship with smartcities. In the last two articles I have written about two recent nodes of the global fab lab network. Although there are other fablabs in Spain, I decided to give visibility to these two initiatives in León and in Sevilla. Among all fab labs in Spain those two are giving a real opportunity to make personal production and digital manufacturing accessible and comprehensible for a wide range of people. However, the most popular manufacturing laboratory in Spain is Fab Lab Barcelona (2008). It is settled in the IAAC – Institute for Advanced Architecture of Catalonia and it is part of the Fab Lab Network. I would like to share my interest in their research on how the digital production ecosystem could make our cities smarter.
From Fab lab to Fab City: Barcelona 5.0
As Tomás Diez, director of the Fab Lab Barcelona project, explains in interview at owni.eu held in November 2011,  their idea is to make Barcelona a Fab City. The current urban layout of Barcelona can be seen as a product of major events like the 1992 Olympics  and the Universal Forum of Cultures in 2004. For the future of Barcelona, Vincente Guallart  (former director of the IAAC and chief architect of Barcelona), and Antoni Vives (deputy mayor in charge of urban planning and information and technology) aim to build Barcelona 5.0.

Image from owni.eu
This proposal consists on a fab city made up of an interconnected community of neighborhood fab labs. The venues’ goals would be to encourage entrepreneurship and interest in innovation that have already been present in Barcelona throughout centuries. As they see it, bringing factories back to cites will lead us through a new industrial revolution where production methods and social bonds will be transformed. To set the project up they are currently developing a brand – FabCity. A foundation would promote the project and it would be funded by the public and private sector. The goal is to set up a fab lab in each neighborhood to produce devices and products for the local community. Right now they are still reflecting on how to make these fab labs economically viable. Fab labs would be eventually managed by neighborhood’s residents that would have assisted to training courses.
City Protocol
On the other hand there is an important project going on in Barcelona seeking to make it a smarter city. Guallart’s team has been developing a model to define the anatomy of cities, using a set of common parameters, that could be used worldwide to characterize each city. It is called City Protocol and it aims to be a kind of unique “city ID card”. Guallart briefly sketched the model at the Smart city expo in Barcelona. City Protocol is a certification based system that aims to offer a unique fingerprint for each city, based on several parameters like information, water, energy, mobility and production. This last area could be used as the appropriate environment to develop the FabCity deployment project. As Neil Gershenfeld sees it, cities would become truly self-sufficient by developing these projects. He describes this scenario as « a solution to avoid the economic and ecological disaster of the current global production system ».

Below, you can read an interview with the architect Tomás Diez about the Fab City project. Tomás Diez is currently Project Manager of the Digital Fabrication Laboratory “Fab Lab Barcelona”.

How can cities solve the need of providing more and more diverse services, in a scenario of cutting budgets, while taking advantage of the opportunities that « fabbing » bring to us? At the Fab City… how do you think that having a neighborhood fab lab would change people’s lives?
TD: The answer to this question needs to be thought in a different perspective, cities need to be updated from the organization point of view, we need to re-envision the role of governments, and think that cities should provide commodities and platforms for people to solve their own needs. Services are associated with the consumption model, which has the service provider in one side and the consumer in the other, in the new scenarios this both ends are merged, and we need spaces and platforms for this to happen at different levels, from the neighborhood exchange, as happened in the past, to the high tech centers to bring digital fabrication to common people, as happened with web publishing, photography or video making. In the recent past we became publishers, editors and even journalists, now is the time of the makers.
Neighborhoods will be production clusters, as they did in the medieval age, we are in our way to a high tech medieval age, not only concentrated into the technocrat point of view, but with a high load of humanism and local needs perspective.
What is the business plan for these fab labs?
TD: It will be a mixed model in which the City Hall participate as instigator and initiator of the process, but with the vision that these Fab Labs should be economically sustainable, still with a participation of the government over time.
Are you planning mixed models like FabLab León?
TD: Each Fab Lab has its own « personality » in this case, the Fab Labs at Fab City are part of an strategic vision about the new productive cities, and how they can be more than service providers and trash producers. We would like to say that our labs will be centered on the citizen, not as user but as the motor for the fab labs to operate at different levels:
– education and research: by developing its own programs and collaborating with schools, universities and research institutions and centers.
– social sustainability: by generating solutions for local needs and engaging all the sectors of the society on the digital fabrication revolution and its implications.
– business platform and entrepreneurship: by giving the means and the tools to take ideas to the next level, and to think about new models of collaboration, and project development, like crowd sourcing and crowd funding.
Should individual initiatives be able to join this FabLab city project?
TD: Absolutely, Fab Labs will be platforms, they should be the mean and not the end itself of the project. Companies, individuals, institutions and society will be encouraged to participate in the project.
Would all fab labs be part of the MIT’s Fab Lab Network?
TD: A short answer is yes but what we call today MIT’s Fab Lab Network will migrate to a more distributed organization that will not only depend on the US, the Fab Foundation will be the support organization of Fab Labs worldwide. Fab Lab Barcelona is on super node on this network, we work as an European hub of Fab Labs, so all initiatives that we are supporting will be part of this worldwide network. (The End)

I trust ITC technologies will help us to find cheaper, healthier and more beautiful and sustainable solutions for cities. As we have seen in the participatory sensing series, technology is helping promote people’s participation and engagement in bottom-up projects to raise awareness on specific local problems. I just hope FabCity project will promote the participation and engagement of people in this city transformation process.
Finally I am grateful to JP de Vooght, César García, Sara Perez Thomsom, Alejandra Climent, Jorge Medal, Pedro Hernández and Ethel Baraona for the feedback and conversations on Digital manufacturing (fabbing) environments.
This post is by Sara Alvarellos, a guest editor at complexitys.com
Sara Alvarellos is a young architect interested in citizen engagement and implications of technology for architecture and urbanism, actually collaborating with sienteTecity and Oblomobka. Currently researching about Contemporary production, commons and The Internet of Things into Masterdiwo_Alicante framework.

[…] Pushing the idea of FabLab further than just a lab – FabAcademy, FabCity […]

[…] of Barcelona is already underway in pursuit of this goal of producing what it consumes with its Fab City initiative. It is also the site of this year’s 10th International Fab Lab Conference. Bhutan […]